A temperature sensor is a device that provides temperature measurement via an electrical signal.

Resistance Temperature Detector (RTD)
The RTD is known as a resistance thermometer and measures the temperature by the change in resistance of the RTD element with the temperature. The metal can be made of different materials including platinum, nickel or copper. However, platinum is the most accurate but also carries a higher cost.

• Thermocouple
The Thermocouple is a sensor made with two different metal wires connected together at the sensing end. The voltage measured on the other end reflects the temperature being measured. Although the accuracy can be slightly lower than an RTD, they have the most extensive temperature range from -200 °C to 1750 °C and are generally more cost-effective.

To simplify, a temperature sensor does just that, it senses the temperature of any content needing to be measured, whether they be solids, liquids, or gases. In some cases where these Thermocouples and RTDs are connected directly to a PLC, the result of the measurement accuracy is sometimes worse than expected. This loss of accuracy is often caused by electromagnetic interference, (EMI). By converting thermocouple and RTD signals to industry standard 4-20 mA current, errors due to EMI can be effectively eliminated.

Thermocouples create a voltage signal of less than 50 mV, and a thermocouple has practically no ability to create a current flow. Therefore, any device that measures a thermocouple must have a very high input resistance, (usually 1 million ? or more).
The combination of a low mV signal and no current flow makes thermocouples behave like an antenna. Electrical noise from 50/60 Hz power mains, burst noise from lightning, static electricity, radio frequency interference from portable radios, commutator noise from electric motors and many other sources of electrical noise can be “received” by a thermocouple – and the longer the wires are, the more opportunity there is to “receive” electrical noise.
The same thing can happen when measuring temperature with RTDs. The RTD element is excited by a tiny constant current source, (typically 0.3 mA). Therefore, the sense wires also act like antennas, picking up a wide range of noise present in the industrial environment.
To create a more accurate temperature reading the use of a transmitter is required. A Temperature Transmitter is a device used to connect to the RTD or thermocouple to amplify and condition the small signals of the temperature sensor. It then transmits these signals for monitoring and controlling purposes.

Once conditioned to a usable level, this signal can be transmitted through ordinary copper wire even over long distances and used to drive other equipment such as meters, dataloggers, chart recorders, computers or controllers. A temperature transmitter draws current from a remote dc power supply in proportion to its sensor input. The actual signal is transmitted as a change in the power supply current. 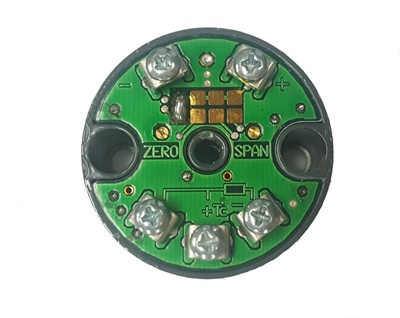 The temperature of the transmitter can be scaled to accommodate the needs of the application and only two wires are required on the output to transmit the 4-20mA signal.

Put simply, a temperature transmitter is an electrical instrument, which interfaces to the temperature sensor. It isolates, amplifies, filters noise and converts the signal from the sensor and sends it to a control device.

You can now understand there is an advantage in using a transmitter with temperature sensors. They work together and have a critical role in ensuring accurate temperatures are measured, communicated as well as controlled.